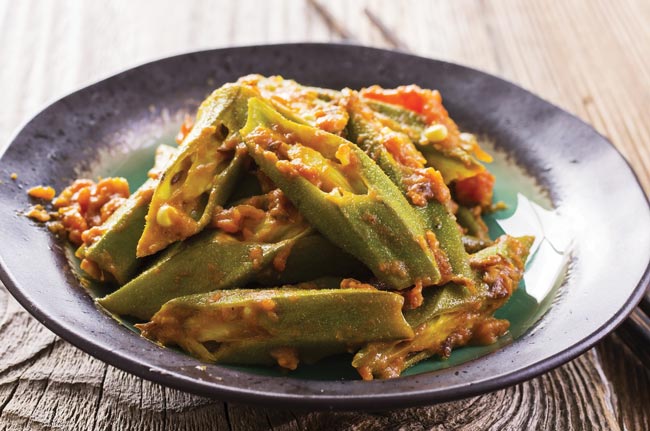 Growing up, I was an okra stew fanatic. Whenever my mother made it, I could be continually counted on to eat to excess and then promptly fall into a food coma. I’ve cut back as I’ve grown older because okra stew made with palm oil isn’t the healthiest of dishes. Several chefs have attempted to adapt the recipe with vegetable oil to make it slightly healthier and reduce the cholesterol impact of the palm oil; however, I believe that the palm oil is essential to rich, deep flavour of the dish. I’m a okra stew purist, if you will. As such, these days, I only eat it sparingly, but relish those rare occasions.
If you do choose to adapt the recipe with vegetable oil, I suggest using poultry instead of beef or smoked meat as the flavour is slightly better.

Okra stew is a fascinating dish because of its many permutations across West Africa and its reinvention in the Americas as gumbo. Creole gumbo usually features a roux (a thickening agent made with a fat such as butter, mixed with flour) and is typically served over hot rice.

This recipe uses garden eggs, which are also called “African eggplants.” When I first arrived in Accra, I was very confused as to what exactly the pale yellow “garden eggs” were. After some inquiries, I learned that they are simply another variety of eggplant. In the States, if you’re lucky, you pay be able to find them at speciality African (and sometimes Asian) grocery stores. They’re slightly more bitter than the aubergine (dark purple) eggplants I am used to.

The banku mix has to mix with water and small salt in a deep sauce pan in a tick form and stir on fire with a wooden stick until it become very sticky for about 45 to 1 hour on fire. After it becomes sticky like bread mixture, try to make small balls of it and put them in a deep plate and serve it with your okra stew.